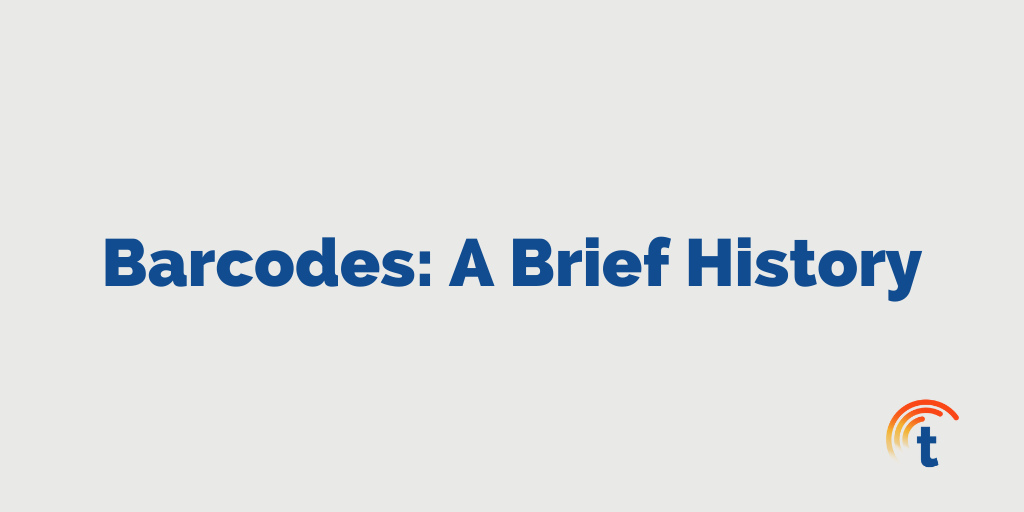 The first barcode, with a design like a bullseye, was invented in 1948 by two Drexel University students named Norman J Woodland and Bernard Silver. They were interested in tackling the problems of the supermarket industry, which sorely needed a better method of inventory management and customer check-out. The pair received a patent in 1952. Long story short, it worked in the lab but was wildly impractical due to the limitations of the technology of the day. 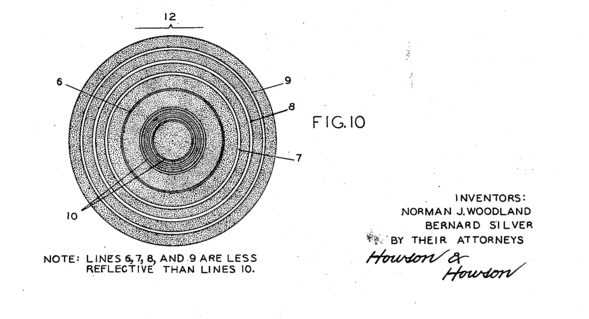 The first practical implementation of a linear barcode came in the 1960s. The Association of American Railroads sponsored the project and Sylvania (Needham, Massachusetts) built the KarTrak ACI (Automatic Car Identification) system.

David J. Collins, an MIT graduate, designed the system. He had become aware of the need for tracking rail cars while working for the Pennsylvania Railroad as an undergraduate. 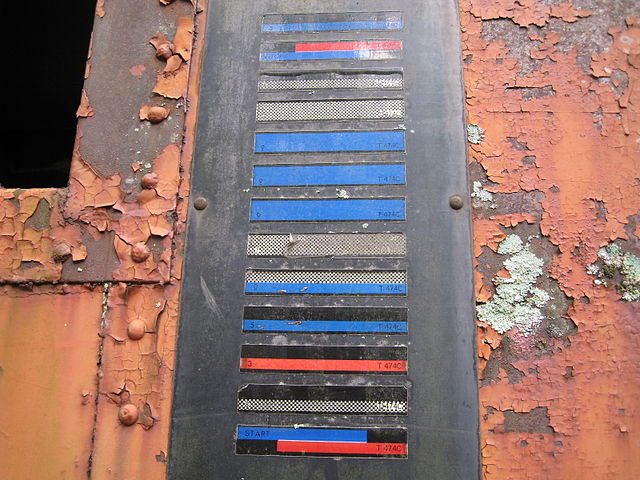 The KarTrak barcode reader was a machine the size of a refrigerator. It would activate as the train approached, shine a 500-watt light on the cars and a sensor would interpret the reflections. The data would print out on a teletype machine, paper or magnetic tape. In some cases, data could be recorded directly to a computer (keeping in mind that computers of the day could fill a small room).

KarTrak beat out three other competitors (one of which used RFID) and became a US standard in 1968. All North American railroads adopted KarTrak. Amazingly, in 1975, a full 90% of US rail cars carried KarTrak labels.

Yet just three short years later in 1978, KarTrak was abandoned. Many reasons are cited such as poor read accuracy, lack of maintenance of the barcodes, the high cost of computers and a rash of railroad bankruptcies.

You might still see the occasional KarTrak label on a railroad car today.

Lasers - Not Just for Sharks

At the height of KarTrak's success, Collins was growing increasingly frustrated at Sylvania. He couldn't convince his management to pursue other markets for his barcode technology. He decided to quit Sylvania and co-founded Computer Identics Corporation.

Computer Identics used increasingly-affordable helium-neon lasers to illuminate barcodes. The 500-watt light bulbs used previously were wasteful and difficult due to the heat they would generate. Barcodes could only be read in one direction. By contrast, lasers could be directed using motorized, moving mirrors which enabled scanning barcodes rapidly from a wide variety of angles. It was a major improvement in speed, accuracy and reliability. It allowed the scanner to read partially-damaged labels because the moving laser would eventually scan the undamaged areas.

This new laser-based barcode system found a happy home in a General Motors manufacturing plant in Pontiac, Michigan. It was successfully used to track the manufacture of car axles. This victory propelled the nascent technology forward and cemented Computer Identics' place in the industrial history books.

Barcodes for supermarkets remained a holy grail of sorts due to the potential for huge productivity gains. A technology race developed between RCA and IBM throughout the 1970s.

RCA had purchased the original barcode patent, but ultimately, IBM (who didn't have the patent but did have Norman Woodland, the original inventor) ultimately won the race with the invention of the linear UPC barcode (more on UPC in the next section). UPC beat out RCA's bullseye barcode design primarily due to limitations of the printers of the age. Bullseye barcodes would sometimes smear in the direction the paper stock was running through the printer, whereas UPC barcodes (being just vertical lines) did not. That was the clincher.

The invention of the UPC barcode, the falling cost of lasers and the rise of the integrated circuit all coincided to enable the most significant achievement in logistics in the millennium -- buying a pack of gum. On June 26, 1974, at 8:01 am, Sharon Buchanan scanned the first grocery item ever in a Marsh's Supermarket in Troy, Ohio -- a 10-pack of Wrigley's Juicy Fruit gum. The pack of gum and receipt are now in the Smithsonian Museum.

The Glorious 1980s - Barcodes and the Author Come of Age

In 1986, I was a high school freshman working part-time in an independent supermarket. My job "interview" consisted of me climbing onto the deli counter and scrubbing the grit off freshly-grouted wall tiles. "Good job, kid! You're hired."

This supermarket was a gut rehab, rising like a capitalistic phoenix from the ashes of the failed Shop-Rite that came before it. The job provided upward mobility as I worked my way up from tile-scrubber to bagger to stock boy to cashier, before eventually leaving for college.

To the delight of cashiers everywhere, many supermarkets in the US in the 1980s adopted barcode scanning technology. The Universal Product Code (UPC) symbol was the barcode of choice, and today can be found on nearly every manufactured retail item. 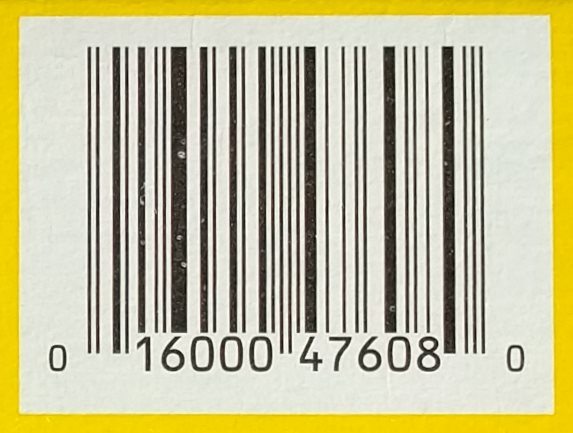 What you might find interesting about a UPC barcode (UPC-A, to be specific) is that it encodes just two facts: Manufacturer and Product Code. The barcode shown above translates to, "General Mills" (the manufacturer) and "21-oz Family Size box of Cheerios" (the product code). Point of fact -- 21 ounces of Cheerios does not feed a family for very long.

If you pick up five boxes of Cheerios of the same size and package design, they will all have the exact same UPC number. Therefore, in the supermarket anyway, UPC barcodes are not unique tracking numbers. They are essentially a part number.

UPC codes can encode a maximum of 11 numeric digits (0 through 9) plus a 12th trailing checksum. The checksum is the result of an algorithm or function applied to the other numbers and is used to ensure accuracy in scanning.

UPC supports no letters and no special characters like punctuation. This limits the range of numbers you can encode to whatever you can cram into 11 digits (0 through 99,999,999,999). While 100+ billion unique numbers might sound like a lot, other kinds of barcodes can do better by allowing non-numeric characters as well as longer codes. These facts make UPC codes a poor choice for use in serialized, physical asset tracking systems.

Another lesson UPC teaches us is that unique, serialized ID tracking of one-way, consumable products is generally overkill. Generally speaking, you don't need to uniquely identify every box of cereal in a case or on a pallet.

Regardless of the lack of serialized asset tracking, the benefits of barcode adoption in supermarkets were enormous:

Sadly, my independent supermarket did not adopt barcode technology. Which meant that as a cashier, it was my job to manually key in the price of every item being purchased by the customer. I learned that manual data entry is both soul-sucking and prone to human error. For this reason, at TrackAbout, we strive to eliminate manual data entry whenever possible. 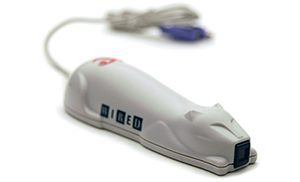 A discussion of the history of barcodes would not be complete without discussing this weird chapter.

In the year 2000, U.S. publications like Wired, Parade magazine and Forbes began printing proprietary barcodes next to articles and advertisements. The intent of the barcodes was to require readers to scan them in order to "learn more".

This all happened before the advent of the modern smartphone. The barcodes could only be read with a device called a :CueCat. Yes, that's a leading colon and yes, the device looks like a cat, and yes, they probably thought it was clever that a cat would be plugged into a PC next to a mouse. Marketing!

There was a bit of a chicken-and-egg problem in that you couldn't read a proprietary barcode without a proprietary barcode scanner. Thus subscribers of the aforementioned publications woke up one day to find a :CueCat device in their mailbox. Radio Shack gave away, for free, thousands of the devices at its retail stores (just one of many reasons it cited for its eventual bankruptcy in 2015).

Full disclosure, I own a couple of :CueCats. Wired sent me one and I picked up another free from RadioShack (sorry if I contributed to your demise, old friend). I "neutered" the cats by following some instructions I found on the Internet to disable the proprietary encoders and turn them into generic barcode scanners. No actual cats were harmed in this endeavor.

To install a :CueCat, a user would need to:

Now, the fun part. Imagine you're relaxing on the weekend, chilling on the sofa, reading a magazine. For the sake of argument, we're going to have to assume you only read magazines within range of a PC. Goodness! What's this barcode next to this Coca-Cola ad? What more can I learn about this mysterious product? Let's find out. Get up and get over to the computer. Boot it up. This being circa-2000, it takes a while. Log in. Dial-up to the internet (year 2000, right?). Grab your :CueCat and scan the barcode (you remembered to bring the magazine, didn't you?). Now wait patiently for a web page to progressively load bearing the gift of additional advertising. Enjoy.

So what exactly was going on here?

In the heady exuberance of the dot-com boom before the crash in 2001, a company called Digital: Convergence (mmm, colons) raised $185 million on the promise it would "merge the physical and digital world." What they accomplished instead was to create what PC Magazine dubbed one of "The 25 Worst Tech Products of All Time".

The :CueCat was universally considered a failure of the highest order.

There's so much more to learn about :CueCat over on the Wikipedia page. Trust me, it's worth it.

Barcodes and other kinds of ID tags are everywhere, tracking everything that moves in novel and clever ways. if you turn your head from right to left (eyes open, please), you'll probably spot at least three items near you that have barcodes on them.

Today, barcodes are used to identify patients in hospitals, validate prescriptions, automate manufacturing processes, log into wifi networks, exchange contact information, check in airline passengers and movie-goers, check out groceries and other retail purchases, help you track your calories using smartphone apps and much, much more. Recently, I scanned a QR code posted at a bus stop and my smartphone told me how many minutes until the next bus. Oh, and barcodes are also used to track physical assets through the supply chain, which is why I'm writing this book.

There's a lot to know about barcodes, but from here on out, we're going to focus on the asset tracking space. I look forward to exploring the world of barcodes and asset tracking with you. I hope you enjoy the journey.