Butler Gas is a gas distributor and producer of acetylene in Western Pennsylvania and is based in Pittsburgh. Butler Gas has been barcoding their cylinders since the late 1990s and has been using TrackAbout for cylinder tracking for more than 10 years.

In late 2018, Butler Gas came to TrackAbout with an idea for a real-time production dashboard that shows how many cylinders have been filled so far that day. TrackAbout worked on the technical backend while Butler Gas purchased and installed monitors in their fill plant and spec gas lab. For many months now, Butler Gas has had real-time dashboards that update every minute and show the count of different types of cylinders filled by each filler so far that day, in each location. The dashboard also shows the fills so far for the week and month. Being web-based the dashboard can also be viewed on laptops and be kept open in a tab in a browser.

We circled back with Jesse Pitell Butler Gas’s Vice President of Finance, to ask what impact the dashboards have had on production…

“With the production dashboards up in the plant and on managers’ laptops we can all see the production numbers in real-time throughout the day. This is helping us to prioritize our team’s days. Our team that fills cylinders also does cylinder maintenance and other jobs. By keeping that production number visible to everyone it helps them to focus on getting enough production done every day. 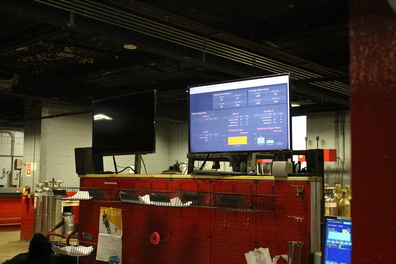 Before the dashboard, we commonly found ourselves keeping people after hours to finish production needed for the next day. Our policies don’t let fillers fill alone so if we needed to fill after hours it required multiple people to stay on overtime.

Now with the dashboards we have really seen a drop in the amount of overtime we need to pay as the result of getting our filling done during normal business hours. This is less disruptive to our people’s home lives and it is saving the company money.

We also see the dashboards promoting the kind of accountable, metrics driven culture that we are growing here at Butler Gas.

TrackAbout was great to work with on this project. They even made it work for our non-barcoded customer-owned cylinders so that we can just key in quantities instead of scanning them.