Fusing Relationships with Customers and Community

Westbury, NY-based General Welding Supply is a wholesale distributor of industrial, medical, specialty and cryogenic gases as well as a full line of welding supplies. Family owned and operated since 1923, employees share a commitment to providing customers throughout the Long Island-Greater Metro area with quality goods and services at the best value. They also recognize a vested interest in the well-being and safety of their local communities.

Prior to implementing an asset tracking software solution the company experienced issues familiar to packaged gas distributors such as lost cylinders, rental disputes, billing mistakes and manual errors. A challenge to their operation, they also were a potential threat to customer relationships.

The High Costs of Lost Assets

In the packaged gas distribution industry, it’s common for at least one percent of distributor-owned cylinders to disappear from their customers’ locations each year, either by accident or theft. Consider a large hospital serviced by many different emergency medical service providers who procure their oxygen cylinders from various suppliers. It’s easy for cylinders to get mixed up in emergency situations or when transporting patients between facilities.

Customers often are surprised to learn that they will not receive credit for returned cylinders that are not owned by the distributor. In the customers’ eyes, all cylinders are the same. But in the eyes of General Welding, a cylinder is an investment, not only of money but also in quality.

“It’s important that we get our own assets back,” said Kristen Lanzano, FDA Compliance Manager of General Welding. “We are committed to quality and safety. We know our cylinders are cleaned and maintained properly. We can’t make that assumption about cylinders from other suppliers so it’s hard to guarantee our product if we were to use those owned by someone else.”

So the customer continued to pay rent on cylinders they couldn’t locate or they incurred a $150 replacement fee for each one. “The customer is never happy in a situation like this,” explained Lanzano. “But we didn’t have a foolproof tracking system in place so we really didn’t have a leg to stand on. Even when they continued to pay rent on lost cylinders, we still needed to replace the ones missing from the pool. In the end, we lost money by having to replace them and our customers were dissatisfied at best.”

The cost of replacing lost cylinders can be a significant expense for distributors. It’s not unusual for a large customer to have over 100 unaccounted for cylinders annually. At a replacement cost of $150 to $200, just one customer could result in an expense of at least $15,000.

Motivated by the need for better supply chain accountability, General Welding embarked on a mission to implement an fixed asset tracking software solution.

General Welding wanted a simple, easy-to-use solution that worked effectively and consistently and wouldn’t disrupt their business. “TrackAbout was the only solution that offered what we needed in terms of functionality and hardware,” said Lanzano.

It’s usually during a customer audit when a cylinder is determined lost. “TrackAbout quickly shows us which cylinders were never returned to us,” said Lanzano. “We can be sure they haven’t been returned because they would have been scanned when our driver picked them up,” she continued. “And if the driver forgot to scan them, other checkpoints in our TrackAbout system would have corrected that.”

TrackAbout provides General Welding with hard evidence to back up charges billed to customers, but Lanzano pointed out it’s not about punishing the customer. Instead, the company wants to create accountability and fairness in the supply chain. TrackAbout helps them accomplish this and provide good customer service at the same time.

“We’re able to convert the lost cylinders to a six- or twelve-month audit lease,” said Lanzano. “If a cylinder finds its way back to us, TrackAbout ensures the credit goes to the right customer. And if it doesn’t turn up before the lease expires, we can issue the lost cylinder fee then.”

This process can save a large customer thousands of dollars per year. “Our customers appreciate the accuracy we’re able to provide and that helps build trust,” said Lanzano. “TrackAbout is a great selling tool that helps differentiate us from our competitors.”

When the terrorist attacks occurred at the World Trade Center on September 11, 2001 many believed that thousands of survivors would be rushed to and cared for at several area hospitals. Hoping to be of assistance to their community, General Welding activated an emergency response plan to prepare and deliver medical oxygen cylinders where they were needed. But as this occurred prior to the company’s TrackAbout implementation, they had no immediate and clear visibility into the location of their cylinders.

Assuming that any cylinder onsite longer than 200 days was empty, the company engaged in a time consuming process of manually reviewing customer accounts searching for empty cylinders that could be returned and processed for use during the emergency operations. Once they had a list, they then called each customer to confirm if the information was correct and then dispatched drivers to retrieve the cylinders for processing and delivery.

While improving operational efficiencies and providing exceptional customer service are important, Lanzano especially appreciates that TrackAbout fixed asset tracking enables General Welding to provide swift community support in times of need. “We were able to determine instantly the number of cylinders at each customer location longer than 200 days,” recalled Lanzano. “TrackAbout helped us pinpoint which customers had the most and we focused our attention on calling them first. Because we had accurate information, we and our customers were able to respond quickly.”

As their customers included two hospitals and three nursing homes located within the evacuation area, General Welding also assisted with the evacuation efforts by moving gas cylinders from these locations to the relocation areas. When calls to competing gas distributors went unanswered, facility administrators asked General Welding to relocate cylinders owned by the other companies.

“There was a feeling of panic in the air and it was unrealistic to expect our customers to efficiently manage the movement of cylinders while dealing with the chaos of moving patients, so we agreed to assist,” said Lanzano.

She added, “Without TrackAbout I’d have been very wary of moving cylinders we don’t own. Our assets were mixed with those from other suppliers and they all look the same.  They’re the same color, the same size and have the same valve. They’re impossible to tell apart unless you look closely at a small identification label. It would have been a nightmare to separate ours from the others. But they were accounted for immediately in our TrackAbout system. We knew where all our assets were located at any given time and we reduced manual mistakes that are common when operating under such urgency and chaos. TrackAbout gave us a degree of control during the hurricane — something we believe our competitors didn’t have.”

Thankfully, efforts to survive Irene mostly were not needed as the hurricane turned away from the East Coast. But only a year later, Hurricane Sandy brought record flooding to New Jersey, New York City and Long Island. With widespread power outages, General Welding operated on generators to keep critical medical gases supplied to emergency responders.

In the aftermath, the company received a number of medical oxygen cylinders that were exposed to flood waters and likely were contaminated by any number of things including hydrocarbons from overflowing fuel tanks. Reprocessing these cylinders is an expensive process requiring special attention to receiving, inspecting, cleaning and repairing.

“Customers generally don’t know how dangerous the mixing of oil and oxygen can be,” stressed Lanzano. “With TrackAbout, we can track the cylinder to the correct customer and warn them of the potential dangers of cylinders that might still be at their location to prevent a catastrophe from taking place. We also can recoup the cost of cleaning the assets by charging it back to the customer.”

A Win-Win for Supplier, Customers and Community

“TrackAbout helped us control costs, improve our operations and utilize our assets to their fullest extent,” concluded Lanzano. “Our customers value the accuracy of our billing statements and understand how we’re able to save them money too.”

While improving operational efficiencies and providing exceptional customer service are important, Lanzano especially appreciates that TrackAbout enables General Welding to provide swift community support in times of need. “We have an obligation to give back to our communities,” said Lanzano. “There is no time more trying than during an impending disaster. By giving us quick access to accurate information, TrackAbout makes it easier to focus on the job that needs done.”

While General Welding is realizing many benefits from TrackAbout, Lanzano admits that the company hasn’t fully tapped all the features of the system. “We’ve started to focus on ways to more fully utilize the system and expect the benefits and cost savings to continue to grow.” 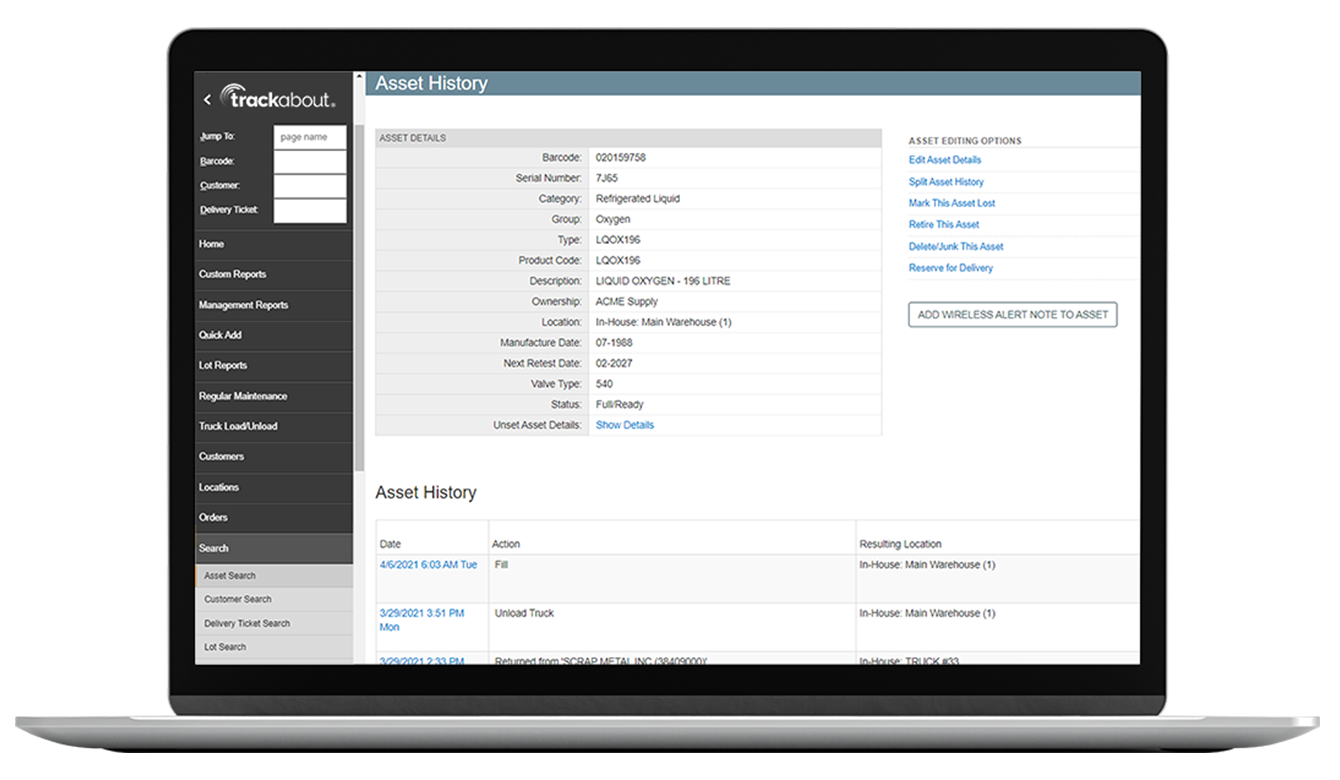