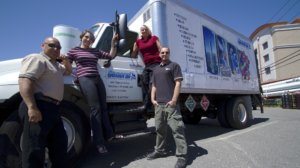 Companies in the packaged gas industry make and distribute all types of gases, such as oxygen, helium and acetylene for industry, medicine, manufacturing and research. Gas is placed in cylinders, which are then tracked using TrackAbout. Most Packaged Gas companies charge rent on the containers for as long as they’re with the end customers.

A customer stopped paying its rental bills and disappeared. GWSCO followed their standard procedure and sent the delinquent rental customer to collections.

Without a tracking system, things would stop there. But with TrackAbout, GWSCO was able to flag the account to prevent future cylinder transactions. GWSCO also took the proactive step to set alerts on the specific outstanding gas cylinders so they’d know immediately if the assets turned up in any future transactions.

Shortly thereafter, alerts from TrackAbout notified GWSCO that a few of the missing cylinders had been returned. The assets had been returned from a different, new customer. Not altogether impossible, but GWSCO continued to investigate.

They discovered that the customer they sent to collections had gone bankrupt and closed their business. They reopened a new business at a new location, and brought GWSCO’s assets with them. The newly formed company then set up a new contract through a different sales person at GWSCO.

GWSCO says if it wasn't for TrackAbout, this customer would have gotten away without paying their rental on the old account, and would still be getting cylinders with the new account. The last laugh was GWSCO’s as they took this delinquent customer's back payments to the bank.