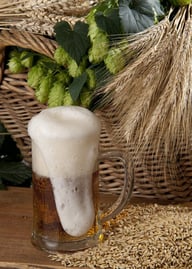 When I say beer keg tracking software, you probably think I’m talking about eliminating lost kegs by using barcodes or RFID tags and a scanning device. You’d be right. But there are so many other ways tracking software can benefit brewers and wholesalers. I think the most interesting is eliminating expired kegs.

All brewers will tell you that beer is best on the day the keg is filled at the brewery. In general, the fresher a keg is, the better the beer tastes. Depending on the type of beer, the shelf life of a keg can be anywhere from about 45 to 120 days. Most breweries use a “Best By” or “Born On” date to guarantee freshness. Some have instituted programs for consumers to report expired beer so product can be refreshed. But neither of these fully prevents product from going to waste.

As a self-proclaimed beer snob and founder of a local beer tasting club, I’ve heard many scenarios of kegs expiring before a bartender taps them. Probably the most shocking is a situation where an entire pallet of popular kegs expired at a wholesaler’s warehouse. Distribution contracts typically outline who incurs the cost of expired beer, but I’ll bet there was a lot of finger pointing on that one!

If these breweries and wholesalers had a keg tracking software solution in place, they could have received an automatic notification that the kegs were nearing expiration. This would have allowed time for the kegs to be distributed and consumed before spoiling. Or in the case of kegs expiring at the local bar, they could have been redistributed to another bar that sells a higher volume.

Brewers are craftsmen who take pride in producing a quality product. They want consumers to enjoy a pleasant tasting experience. If consumers unknowingly drink stale beer, they may mistakenly think that the beer just isn’t to their liking. If this happens frequently, it could impact future sales.